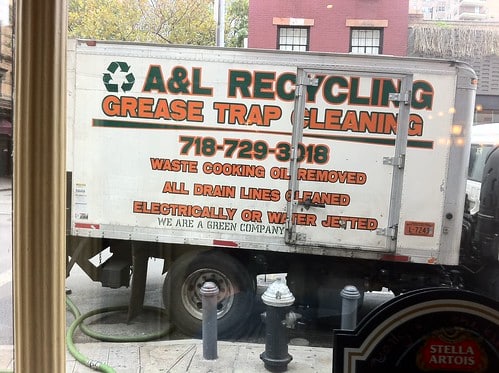 Here’s a question I get asked alot, which should I use grease trap enzymes or grease trap bacteria. Which product is better and what is the difference between the two.

In this post, I hope to clarify the difference between the two types of microbial grease trap cleaners.

First, we’ll talk about each type of product.

A good definition of an enzyme is “An enzyme is a protein that acts as a catalyst in living organisms. It regulates the rate at which chemical reactions proceed without itself being altered in the process”.

There are three main drawbacks to grease trap enzyme products.

Enzyme are very substrate specific. For instance, the enzyme lipase can only metabolize fat and protease can only degrade proteins.

This is one of the key limitations of enzyme based grease trap cleaners. The enzymes can’t react and adapt to the chemicals in the trap. They can only break down specific chemicals.

The second major drawback of enzyme based products in that enzymes are not alive. That is, they cannot reproduce or adapt to their surrounding.

So once an enzyme leaves  the grease trap. Its gone. And it cannot leave copies of itself behind.

The third drawback to grease trap enzyme products is that some of them, not all, contain surfactants. Surfactants simply dissolve grease, and send it down the line. Eventually the grease will come out of solution and cause a problem. That’s why many municipalities and cities have banned surfactants and solvents from grease trap products.

One way to look at bacteria is to think of them as self replicating, enzyme producing factories.

In fact, they have a complex metabolism that allows them to produce enzymes based on their environment. So, if they are in a high protein environment, they will produce more protease.

This ability to adapt to their surroundings is key to their usefulness in grease trap bacteria products.

Secondly, bacteria reproduce rapidly and logarithmically. In ideal conditions, the can reproduce every 20 minutes. This reproduction reduces, but does not eliminate, the amount of new bacteria that need to be added to the grease trap system.

Finally, most bacteria based grease trap cleaning products do not add surfactants to  the product. The bacteria are the main component of  the product.

Let your bacteria have a party in your grease trap!