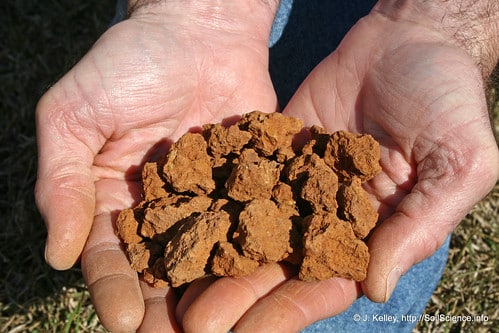 To have good, productive plants, soil structure is a key factor.

It’s important to note the differences between soil structure and soil texture. Soil texture generally refers to only the makeup of the soils component parts. That is, the proportions of clay, silt, loam and sand in the soil.

Soil texture considers the proportions of soil type and the compaction or density of the soil. Soil structure is generally defined as how particles of soil are grouped together into aggregates.

This is not a small difference. Let’s take a simple example.

In both examples the soil texture is the same.

Most of us have seen dirt roads that have been compacted allowing for automotive traffic. It’s unlikely that much plant life would grow on the compacted dirt.

Now imagine that some of the soil was left over on the side of the road. This non compacted dirt would have the same soil texture, but the dirt structure would be much different.

That’s the difference between soil structure and soil texture.

Together, soil texture and soil structure have the greatest influence on pore space in a soil, and how easily air, water, and roots can move through a soil.

How Does Soil Structure Develop?

Soils are cemented or bound together by three processes: physical, chemical, and biological.

Physical and Chemical processes are generally lumped together. So we’ll continue that here.

Taken together the biological, chemical and physical changes increase the organic matter in soil. Making a more fertile soil that is more compatible with plant growth.

How Soil Conditions Changes Over Time

Soil structure changes over time and this change can either be a benefit or a detriment to the organic nature of the soil.

The USDA explain it best when they say: “practices that provide soil cover, protect or result in the accumulation of organic matter, maintain healthy plants, and avoid compaction improve soil structure and increase macropores.”

I would add the other key practices such eliminating soil screening and minimizing handling, and avoiding use of sodium salts.

CustomBio manufactures and distributes a wide variety of biological products for a number of applications and a number of industries. Biofertilizers and soil amendments for both farming and gardening are specialties.

We’re always looking for new distributor relationships, both domestic and international. Contact us at Bill@CustomBio.biz for more information.