How to Get Rid of Roundup in Soil – Glyphosate Removal 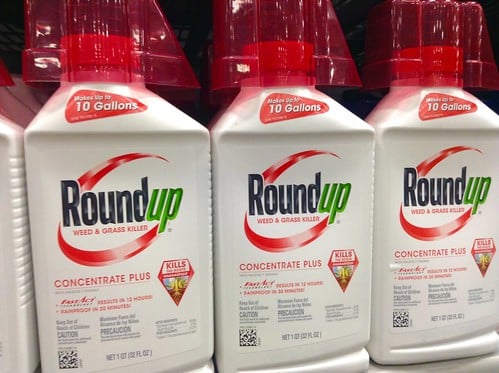 How to Get Rid of Roundup in Soil – Glyphosate Removal

We’ve received a lot of interest lately in how to get rid of roundup in soil. Roundup has an active ingredient of glyphosate and has been in the news a lot of late.

Let’s remember that Roundup is used as a weed killer or herbicide. It is one of the most widely used weed control chemicals on the market today. It’s used on farms and on residential yards.

Do you have problems with roundup? Use our Small spill kit.

The Problems with Roundup – A Summary

There are a bunch of known problems with Roundup. Here’s one of the best summaries of the problems that I have seen from the Ecology Center website.

Since roundup ends up in the soil, that where we need to take care of the problem. It turns out that microorganisms, our soil heroes, are quite good at breaking up and degrading Glyphosate. That’s the good news.

The bad news is that Roundup can kill some off the beneficial microbes in the soil.

However, if you do not have a thriving microbial soil population or if you suspect that the natural microbes have been killed by Roundup, you should consider adding them. The addition of soil microorganisms will prove beneficial to your soil.

According to USDA scientists.

Contrary to claims that Roundup has no effect on the soil, USDA microbiologist Robert Kremer found that the herbicide leaches through the roots of dead weeds into the soil and upsets the balance of beneficial microorganisms to harmful ones. According to Kremer, glyphosate can be toxic to rhizobia, a type of bacterium that fixes nitrogen in the soil. It can also affect the availability of manganese, which is an essential nutrient. If the soil is rich in phosphorus, glyphosate can leach into the groundwater. Its presence in the soil also promotes the growth of glyphosate-resistant weeds.

So, if you do not have a thriving microbial soil population or if you suspect that the natural microbes have been killed by Roundup, you should consider adding them. The addition of soil microorganisms will prove beneficial to your soil.

How to Get Rid of Roundup in Soil – A Case Study

Roundup can be removed from soil by use of microorganisms. Removal of soil contaminants by using microorganisms is called bioremediation.

Below is a test using Custom FM, a bioremediation product of Custom Biologicals.

Here’s a bench scale test of the bio-treatability (bioremediation) of Roundup, glyphosate, using Custom FM. We used Custom FM because in this instance we were treating contaminated water.

Results Before and After Treatment

units are in ppb (parts per billion)

BDL is Below Detectable Limits

What is Roundup and what is it Roundup used for?

Roundup is the tradename for the chemical glyphosate. Glyphosate is the active ingredient is Roundup. Roundup is a herbicide and its intended use is to kill weeds. To be effective, Roundup must be applied directly to the weeds.

How long does Roundup stay in the soil?

The USDA says the half life of Roundup in soil is between 3 and 249 days. This means that it can remain in the soil for well over a year. Other studies have reached different conclusions.

How do I get rid of roundup?

One way to get rid of roundup is to use a process called bioremediation. This is the addition of specifically selected microorganisms to the soil. These microbes are selected because of their enhanced ability to metabolize (eat) certain chemicals.

What is the effect of Roundup on beneficial soil organisms?

According to the USDA, roundup can upset the balance between beneficial and harmful microorganisms in the soil.

How to Get Rid of Roundup in Soil – Custom Bio

Custom Biologicals is expert at bio-degrading chemicals like Roundup in both soil and water. Contact us at (561) 797-3008 or via email at Bill@CustomBio.biz